I am sure you’ve heard this advice before. You’ve probably even read it on the Internet. It goes like this: “If you drop your iPhone in water, drop it in rice right away.”

Phewy. That’s soggy advice for a soggy iPhone. Not only will it frequently not work, but it will often do more damage to your wet iPhone, without you even realizing it.

Six weeks later, or ten weeks later or 15 weeks later you think something different: “Phewy, my iPhone isn’t working.” And you won’t remember that you dropped it in water. You won’t connect the buggy iPhone with its underwater adventure. You’ll never know that rice is the culprit.

Rice can damage your iPhone in one of three ways. 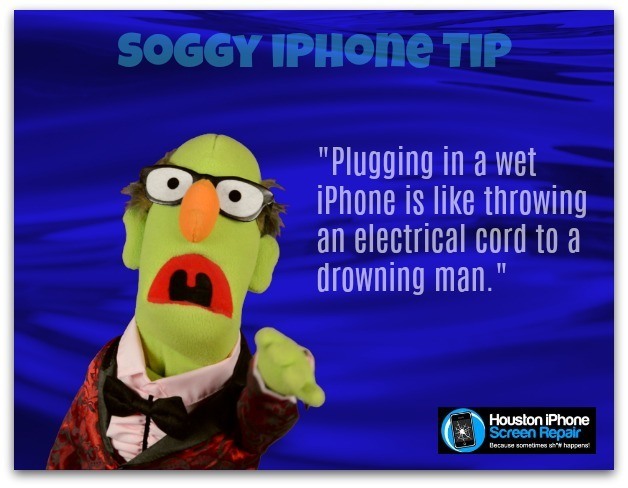 What’s the first thing so many people do after dropping their phones in water? Right after seeing that they don’t work?

They plug them in.

Yes, it seems like the best thing to do, because… because… because… well, because you have to do something, right? But plugging in a wet iPhone will actually do more damage. Think about it for a moment.

Let’s see what happens if we run electricity through it!

Plugging in a wet iPhone is like throwing an electrical cord to a drowning man. Quite the opposite of plugging it in, the first thing to do with a wet iPhone is to get the battery out. Open it up, get it out. Remove all electric current from the motherboard ASAP.

Where there’s a vexing problem, there’s a con artist.  Such are the peddlers of dry boxes.

By “dry box”, I don’t mean a waterproof case. If a case is truly waterproof – and you’ve checked it out with paper inside first – then it’s a worthwhile protection for your next kayaking adventure.

The scam is the “dry boxes” that claim to fix wet phones. They don’t.

Yes a “dry box” will dry the phone, perhaps better than rice. But it won’t clear up the damage already done. So you think: “My iPhone works. I don’t need to get it repaired. Plus, I already paid money to fix it, so it must be fixed.”

A customer came to my shop just a few days ago, looking for a dry box. He was ready to pay for the process, but I opened the phone for free.

I dried it out, no sweat.

Then I looked around…and found what the dry box could not find. It was not drying he needed. What he needed was to have a short on the circuit board fixed. The water had caused the short, and it was keeping the phone from powering up.

My customer would have wasted his money on a “dry box” and still had an iPhone that wouldn’t function.

Don’t be fooled by these three wet iPhone myths.