What? You have no right to repair your phone?

What do cars and mobile phones have in common?

They are both hard to repair.

Oh sure, you can change your own oil. And you can fix your own flat. But a lot of the fancy stuff under the hood these days is electronic, not mechanical. To even find out what’s wrong, you need an access code.

And car companies don’t always give the access codes to you or to your garage.

Your car is a big computer.

Your phone is a small computer.

Fixing your phone screen is easy. We do it for customers like you all the time. But fixing other aspects can be much harder. By “much harder”, I mean much harder than it used to be. The higher the tech, the stingier big companies are getting with the basic information you need to repair your phone.

Apple and Samsung and other companies have their secrets. And some of those secrets are how to fix their phones and tablets. Sorry, I mean how to fix your phone and your tablet.

It’s not just access codes. It’s all the details needed to fix them. When the fix is digital, we can’t just look and “see” what’s wrong. We need diagnostic information from the companies that made the devices.

But the companies want you to return to them for fixes. They won’t release their secrets because if they do, you might fix it yourself or go to a local repair shop in your neighborhood. And then they won’t get your fix-it money. There’s a word for that.

What? Did you say, “extortion?”

Like I said, it’s not just Apple and Samsung. It’s also Ford. And John Deere. And Cisco. It’s all the big guys who want to control what you can and can’t do. Sound familiar?

I’m just a puppet, but it seems to me that if you bought the phone and you paid for the phone, gosh darn, you should have the right to fix it. What do you think? 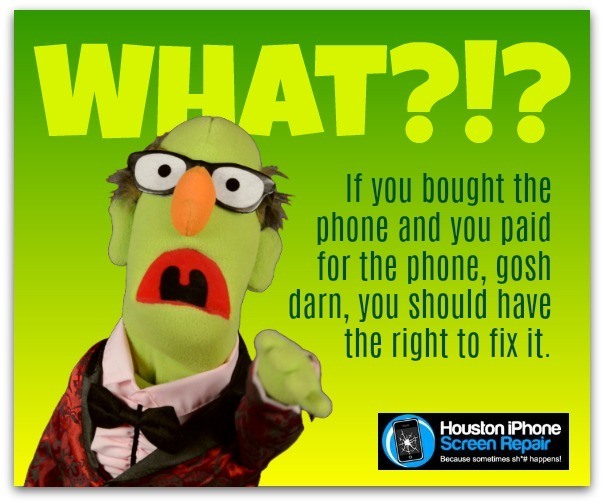 Right to repair laws catching on

Sadly, Texas is not yet one of them. In fact, Kansas is the closest state now debating right-to-repair legislation. The Kansas bill covers only farm equipment, so don’t go rushing north for iPhone repair salvation. Your phone can do lots of things, but sowing seeds and harvesting grain are not among them…yet!

The other states considering the right to repair are:

What would these laws do? Well, they won’t train you on how to fix your phones. But they will make manufacturers behave like grown-ups:

But not in Texas. Not yet.

What Texas needs is a right-to-repair bill. After all, you bought the device with your hard-earned money and you have the right to fix it where you want and when you want.